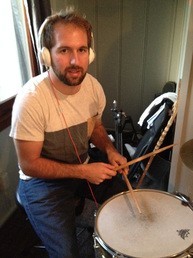 Zach Morillo is a walking, living, breathing beat machine. Since age 7 when he first sat down at a set of drums and stepped into the world of making music, he has been fiercely dedicated to perfecting his passion for captivating audiences with infectiously deep, funky beats. Now having produced for and performed live with multiple international artists such as Childish Gambino, Kat Deluna, Rhye, Jahfe, and Sounduo, Zach has mastered his ability to captivate audiences on massive stages around the world. Some highlights include Rototom Sunsplash Reggae Festival (Spain), Montreux Jazz Festival (Switzerland), One Love Festival (Haiti), Sasquatch Music Festival (Canada), Ultra Music Festival (Miami) and at multiple venues throughout Austria, England, and the US.
With his debut solo project, Morillo, Zach has begun to deeply immerse himself into sculpting and perfecting his own style of music, which he describes as a dance-floor ready, world-music influenced blend of hip hop, dub, and bass. Through his performances, Morillo strives to create a globe-spanning, rhythm-and-bass fueled tribal dance party that will leave his audiences in a sweaty euphoria.

On tour with Rhye: