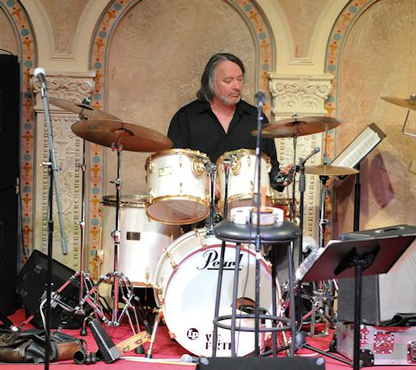 Not surprisingly, given his great time feel and tastefulness, percussionist Olbin Burgos has recorded with artists of the level of Gloria Estefan, Jon Secada and David Le Roth. From his work with saxophonist Ed Calle, harpist Roberto Perera and many others, Olbin Burgos continues to entertain and inspire.

Born in Chicago to Puerto Rican parents, Burgos interest in music began before reaching adolescence. “I started playing drums at age seven,” recalls Burgos, “more than anything in the church. I also studied trumpet and saxophone, but for 10 years only practiced drums”.

For 19 years, Burgos played in a band of contemporary Christian music, and listened to R&B, soul, jazz and Latin music, which would have a profound influence on his playing. By 1976, he moved with his family to Puerto Rico, where he lived for three years. During that period, he studied at the music academy in Bayamón. Later he moved to Miami, Florida, where he continued his studies at the University of Miami.

His first professional tour began in 1985 with the group Rare Silk. In 1990, Burgos played drums and Latin percussion with salsa singer Willie Chirino. In 1992 he traveled throughout the United States, South and Central America with Puerto Rican artist Chayanne. He has worked in the studio, and has been featured in the Baked Potato in Los Angeles. In 1995, Burgos participated in the Heart, Soul and Voice tour with Jon Secada, and later recorded with David Lee Roth. He started playing with Gloria Estefan on their world tour Evolution.

In November of 2015, Olbin began performing on Broadway in the hit musical “On Your Feet,” featuring the music of Gloria Estefan and the Miami Sound Machine.