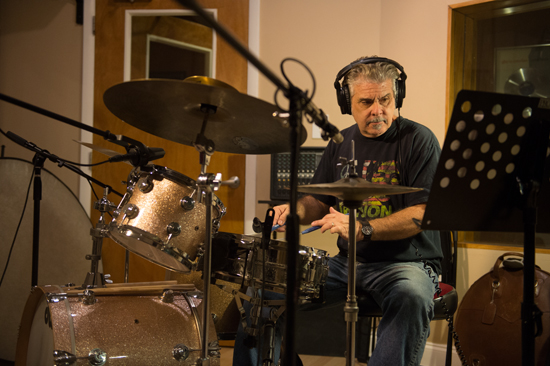 From Jon Secada to some of the best South Florida groups, Jack has done it all. He is currently the drum instructor at Miami Dade College.

Jack was born in the Bronx, New York into the typical Italian-American family, where my first memories of music were visiting my great-aunt Mary’s music store, Fabucci’s Phonograph Shop near 187th and Arthur Avenue. Everything changed when, like millions of other kids, he saw the Beatles on the Ed Sullivan Show. “By this time we had moved out of the Bronx to Bay Shore, Long Island and it seemed like every kid played guitar or drums. It was just like playing ball in the streets, just something we all did.”

The first real band Jack was in when he was 13 was with two brothers, Paul and Tony Como. A few years later when he was 16 he got into a band called “Traction,” that played the Allman Brothers, Santana, and War.

Just as high school was coming to an end, his teacher at the time, Jack Snyder, got him a gig 6 nights a week in the Catskill mountains playing acts (singers, comedians, reading charts). “I probably should have been fired but I survived, and like anything else, you get the hang of it, and by the end of the summer I was pretty good at it.”

Jack attended the University of Miami in the early 70’s. He had the opportunity to listen and learn from students and teachers like Pat Metheny, Jaco Pastorious, Rod Morgenstein, Danny Gottleib, Hiram Bullock, Steve Morse, Bruce Hornsby, T. Lavitz, John Molo, Mark Egan, Stan Samole, and Bobby Watson. “When you hear and play with people like that on a daily basis it raises your game. It has to.”

Jack started working in Miami five nights a week at the Eden Roc Hotel, then six nights a week at Beethoven’s in Fort Lauderdale, a 6 month stay with Randy Bernsen and the Ocean Sound Band where they played at the now defunct Musician’s Exchange every Tuesday night (Jaco Pastorius would sit in often). But the gig that changed everything was a gig in Coconut Grove with Mike Gillis. There Jack would meet some musicians that would later become the “Company”. Jorge Casas, Bass; John Defaria, Guitar; Ed Calle, Sax; Clay Ostwaldt keys; John Lovell, Trumpet; and Joy Francis, vocalist. “That band just grooved! Sometimes we grooved so hard, and it felt so good we’d laugh outloud! But nothing lasts forever, and some of the guys went off with Gloria Estefan.”

Next, Jack joined a group called “Bandera”. “Signed to Island Records by Chris Blackwell himself (Bob Marley, U2) I thought ‘this was it.’ The artists Roscoe Martinez, Lagaylia Frazier and Paquito Hechavarria were great. The producers, Joe Galdo, Rafael Vigil and Larry Dermer were great, but no airplay, not many live gigs. Oh well, on to countless local gigs…”

Jack has also performed with: Shaun Murphy, the 1st lady of Little Feat, Killmo and the Alligator Allstars, Dave Shelly and Bluestone and Jon Secada. He joined the Miami Dade College faculty in the 1980s.

“I’m really fortunate to still be playing and to have turned my ‘hobby’ into the way I make my living. It’s been a great ride and I’m still having fun.”