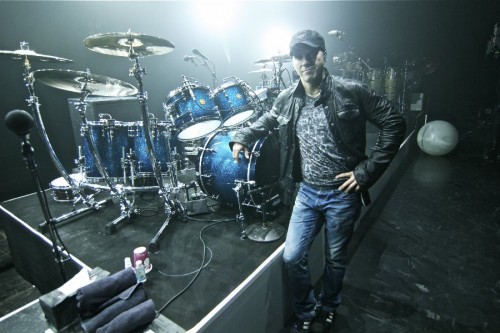 Van Romaine is one of the busiest drummers around and he’s maintained that status for more than twenty years. Best known for his long tenure with the Steve Morse Band, Van’s exceptional drumming skills have also earned him first-call status for dozens of other major artists.

Born in Montclair, New Jersey, Van first started playing drums at the age of five, jamming along with his musical family. By the time he was twelve he was playing professional gigs at parties and banquets in the New York/New Jersey area. As he got older the jobs got better, until he ultimately landed his first “big gig” with the legendary horn band Blood, Sweat & Tears. “My first show with BS&T was a 4th of July festival in South Carolina,” Van recalls. “We were opening for Hall & Oates in front of 250,000 people — with no rehearsal! That was a pretty scary debut, I can tell you.”

Van toured the US, Japan, Australia, and Europe with BS&T until he joined the Steve Morse Band in 1989. His first recording with the high-powered trio was the critically acclaimed Southern Steel. That recording won “Guitar Album Of The Year” in Guitar Player magazine. It also brought Van’s dynamic playing to the attention of the worldwide drumming community—and the rest, as they say, is history.

In addition to performing regularly with the Steve Morse Band, Van keeps busy playing with a wide array of other artists. These include recent and/or upcoming tours with Latin/pop superstar Enrique Iglesias and Europop sensation Nena. He’s also done gigs with funk master Bernie Worrell and prog-rock pioneers Kansas, as well as with Billy Joel, Joan Osborne, The Dixie Dregs, Naughty By Nature, Kim Wilde, TM Stevens, Hiram Bullock, Jack McDuff, and The London Symphony Orchestra. (How’s that for versatility.)

When he’s not on the road or in a session, Van can be found in his own LiveWire recording studio on New York City’s Lower East Side. He’s also in high demand as a clinician, appearing at drumming events around the world.

Check out Van’s video regarding his setup with Enrique: On the Beat With Van Romaine of Enrique Iglesias