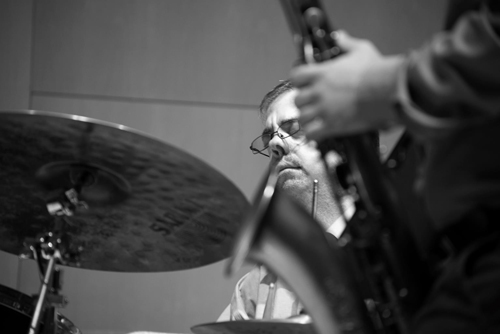 After graduating from UM in 1992, Tom Giampietro moved to Nashville, TN where he was an original member of Grammy-winning saxophonist Jeff Coffin’s eclectic jazz group the Mu-tet. While with the Mu-tet, Giampietro performed on Coffin’s award-winning and critically acclaimed CDs, Go Round, and Commonality. .

In 2003 Tom moved to Iowa to pursue his Masters in Jazz Pedagogy at the University of Northern Iowa. After an incredibly rewarding two years at UNI, Tom moved back to Nashville where he accepted adjunct teaching posts and Vanderbilt University, and Middle Tennessee State University.

In 2006 The University of Northern Iowa asked Tom to serve as an adjunct drumset instructor via interent. This was achieved using dedicated video conferencing machines manufactured by Polycom. This was a resounding success and this association continues to this day!

During his second tenure in Nashville Tom also began a new segment of his performing career in the exciting genre of “Alternative” Bluegrass. This culminated in a four year association with renowned fiddle player Casey Driessen. Tom was a member of Driessen’s exciting touring trio ‘The Colorfools”. During this time Tom also performed with other notable artists in the genre such as Tim O’Brien, The Infamous Stringdusters and Missy Raines.

In August 2010 Tom began yet another new adventure accepting a full time post at the University of Massachusetts-Amherst as a Lecturer in Jazz Studies/Drumset.

In 2013, he has released his first CD as a leader: “A Faith Rewarded” by the Tom Giampietro Quartet, available on CDBaby.