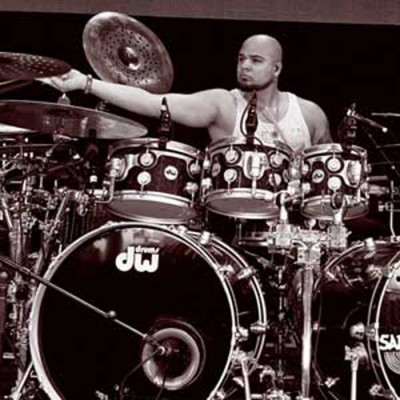 Born in New York City and raised in South Florida, drummer/programmer Omar Tavarez has used the important support of both his parents and his first drum instructor, Jack Ciano to help fuel his passion for success in the music business. And with a sound combining Tony Williams’ no holds barred attitude with Mitch Mitchell’s flashy fills and drive, Tavarez knows no boundaries. In the summer of 2006, Omar recorded drums for Cash Money Records artists, “Lil’Wayne” and “Birdman”, for their 2006 release, “Like Father Like Son”, (album peaked at #3), is currently touring extensively with Miami based rapper/entertainer, (international hip-hop anglo-latino recording artist) “Pitbull” & session drummer for (Grammy Award Winning American hip hop, R&B singer-songwriter, and producer known for his use of Auto-Tune) “T-Pain”.

These recent experiences come together to showcase Omar’s emotion, strength, and command behind the drums. As a teen, Tavarez was groomed by his teachers to be a classical percussionist. Instead, Tavarez chose to mature as an artist, attend the “Frost School of Music”(BFA Jazz & Studio Music), at the “University of Miami”, and ultimately land his first touring gig with two-time Latin Grammy nominee, singer/songwriter “J.D. Natasha”. When he’s not bashing out songs for “Pitbull” or “T-Pain”, Tavarez is getting krunked by programming and producing various styles of music for his independent music production company in South Florida. Omar brings years of electronic music production and a host of drumming ideas to his music collaborations and always pushing the envelope of creativity. He is equally comfortable on acoustic drums as on electric and programmed drums, which adds another dimension to his live performances with “Pitbull”. Tavarez has shared the stage with the likes of Arturo Sandoval, Kevin Mohagany, Claudia Acuna, Lil Jon, Ying Yang Twins, Baby Bash, LMFAO, Paulina Rubio, Suenalo, Afro Beta, Raging Geisha, J.D. Natasha, Decemer Bueno, Akon, T-Pain, Neyo, J-Lo, Chris Brown, Enrique Iglesias, Michel Telho, Marc Anthony and many more. This is my quote: “The truth is, I couldn’t hold a day job because I made to much noise in the work place, now I make a living making noise, and I’m definitely not mad about that”.