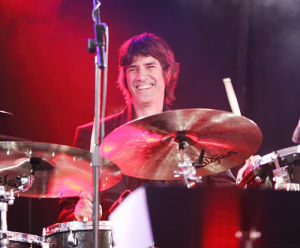 Mike began drumming at the age of ten and from 1982 to 1986 attended the University of Miami, where he received a degree in Studio Music and Jazz. From 1986 to 1987, he toured with Norwegian band Aha and played on ‘The Swing Of Things’, ‘I’ve Been Losing You’ and ‘Soft Rains Of April’ from the album ‘Scoundrel Days’. During that time he was asked by Phenomena co-producer Wilfried Rimensberger to join the superstar rock project, where he played drums on the now legendary “Dream Runner” album and got to know Scott Gorham and John Wetton who both participated in that recording.

He played for the band 21 Guns and later with Iron Maiden guitarist Adrian Smith in Psycho Motel, where he played on both State of Mind (1996) and Welcome to the World (1997) albums. He was also the drummer for Wishbone Ash between 1995 and 1997 and drummer for Asia between 1994 and 2001.

Mike was Head of Drums at the Academy of Contemporary Music in Guildford for 13 years. He is currently the Head of Education at DIME Online (www.dime-online.org)