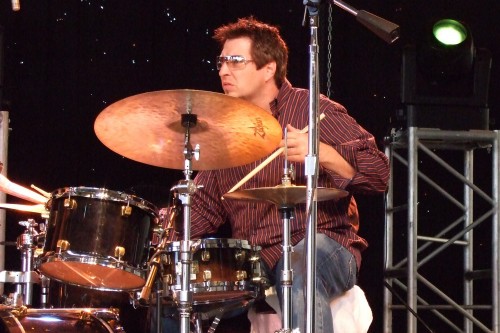 Marko began his professional musical career at age 14 enhanced by the influence of a musical family. Growing up in northeastern PA he started playing gigs with various wedding/club date bands in local country clubs and resorts.

Like others interested in music, Marko wanted to learn as much as possible about the art, especially jazz. He privately studied jazz and classical piano, and studied music theory and ear training at a local college. Finally, he began drum lessons with drumming legend Joe Morello. All of this helped to pave the way for college.
Marko attended The University of Miami, Coral Gables, Florida, and gained an enormous amount of schooling in classical /ethnic percussion, drum set, piano, and arranging/composing. While at Miami Marko had the great fortune to study with one of the best music faculties in collegiate music education. During his time performing with the University’s top concert jazz ensemble, he had the chance to play with some of the greatest musical jazz mentors/performers, such as Joe Henderson, Red Rodney, Michael Brecker and Paquito D’Rivera. Marko also toured with numerous school ensembles throughout Florida, Brazil and Italy. These experiences allowed him to grow as a performer and composer/arranger.

After graduating with a BM in music performance Marko created a four piece jazz ensemble named “Active Ingredients”. Constructed mostly of UM jazz alumni, “AI” performed with or opposite of Randy Brecker, The Yellowjackets and Vital Information to name a few. Also around this time Marko was offered the chance to tour and record with jazz legend Maynard Ferguson. He spent three years playing drums throughout the world with this great ten-piece ‘Big Bop Nouveau Band’. Marko even had the opportunity to compose and arrange for the group. With this gig being more of a high- profile opportunity, he was lucky to garnish attention from drum- endorsing companies and have mention/features in magazines,newspapers and trade publications as Modern Drummer, Talking Drums, Jazz Times, The Chicago Tribune, The Village Voice, The L.A. Times, All About Jazz and LA Scene magazine. His experiences on the road taught him greatly about life inside the “music business”.

When Marko finished his time on the road, he came back east in high gear. He was motivated to start a musical arts renaissance in my home region of PA. Marko created a non profit organization called The PA Jazz Alliance that would dedicate itself to presenting the best jazz and world beat music and would provide high- level music education to those who deserve access to it. Since its inception the PAJA has presented some of the greatest names in jazz and has offered master-classes and week long music workshops for students of all ages and levels. This format opened a wonderful educational door for him as an adjunct professor of jazz studies at Penn State University, Adjunct professor at Marywood University, The Keystone College Jazz Institue and past adjunct professorships at Lehigh University and East Orange Community College, NY.