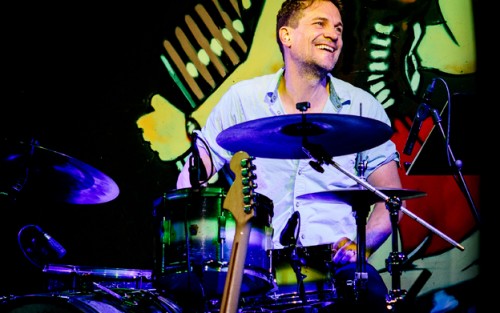 Los Angeles based freelance drummer, Kevin Stevens, is a graduate of the acclaimed University of Miami-Jazz department, where he studied drum set, classical and world percussion, arranging and composition. Kevin wears many hats behind the kit. On any given day he can be found playing indie-rock, jazz, funk, pop, R&B, or big band. Kevin’s extensive musical ability is in demand by a selective mix of eclectic jazz, funk, roots, pop and rock artists. In addition to recording sessions for artists and soundtracks, in the last 2 years, Kevin has appeared drumming on screen in some of the biggest prime time TV shows (CSI Vegas, The O.C., Frasier, and American Dreams) and most recently in the video for the hugely popular song by Faith Hill and Tim McGraw “Like We Never Loved at All.”

Kevin is currently a member of touring band for Neon Neon. Their critically acclaimed debut release, Stainless Style, was nominated for a 2008 Mercury Prize – the top honor for a UK release! The band spent the summer of 2008 doing some of the biggest music festivals across Europe and Japan (including Glastonbury (UK) and Fuji Rock.) They will continue to tour Australia, the UK and USA for the rest of 2008.
In the last year, Kevin has also been on US tours with actress / singer, Minnie Driver, and Chilean pop superstar, Beto Cuevas.

Kevin is also well known as the flamboyant and energetic leader/drummer of San Francisco’s dynamic Brass Monkey Brass Band (BMBB). While BMBB has shared the stage with everyone from Bobby McFerrin to Zigaboo Modeliste (drummer from The Meters), their relentless high-energy shows have thrilled audiences from The Fillmore to The Monterey Jazz Festival. The band’s debut CD, Live in Time and Space, won critical praise and radio play in the US and Europe. BMBB’s follow-up CD, The Highest Good, which featured wide-reaching writing, arranging and performing, pushed the “New Orleans brass band” sound to a whole different level.

Kevin is long time member of the critally acclaimed pop-noise band, Meow Meow. Their debut CD, Snow Gas Bones, is getting tremendous press in Rolling Stone & NME. With all members sharing vocal duties and swapping instruments, they’ve brought their kaleidoscopic live shows to the west coast, Austin’s infamous SXSW, and soon to the UK and Japan.