Ed Toth has been playing the drums for nearly 30 of his 36 years. “I don’t remember my life without music. I truly believe that it was a universal calling.” Ed Toth had no choice but to answer that call. Immersing himself in his fathers’ record collection, a young Ed took in all he could from The Ventures and Wes Montgomery to the Beatles and Jimmy Smith. “It was pretty eclectic,” says Toth. “I could hear Resphigi’s ‘Fountains of Rome’ one minute and Crosby Stills and Nash the next.” Ed participated in any and all music programs throughout his education in East Lyme Connecticut.

“Marching band was a big deal for me and taught me a lot of what I needed to know about listening and ensemble playing. Plus, I played in my first bands during high school.” After high school, Ed took off to the University of Miami, graduating in 1994 with a Bachelor of Music degree. “That place was incredible. I learned as much outside of the classroom as I did in it.” It was in Miami that Ed cut his teeth in his first original band, Jennifer Culture. “ It was a funk-rock kind of thing with influences all over the map. We were young, but I listen to those recordings with fond memories. We were so determined to play music for a living.”

Ed relocated to Boston in 1995 and, in 1996, hooked up with Vertical Horizon. Ed spent nine years with VH and scored a multi platinum smash with the bands RCA debut “Everything You Want” in 2000. The title track was the most played song on U.S. radio that year and won three Billboard awards. The album also yielded the hits “You’re A God,” and “Best I Ever Had.” Vertical Horizon followed up with “Go” in 2003. “The VH experience is an amazing one. I got to fulfill a lot of my dreams and travel the world all of because of being involved with such great music. It was truly extraordinary.” 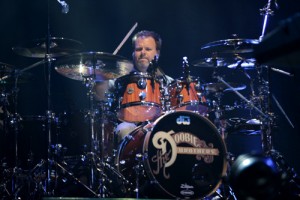 But all good things must come to an end and Ed left VH in April of 2005. Around that same time he got a call from Mike Hossack of The Doobie Brothers, asking if he would be interested in auditioning for the other drum chair. “The Doobies were my favorite band when I was a kid, so I jumped at the chance.” Ed auditioned and got the call to hit the road. “Surreal is one way to describe it! I’m just fired up to be able to play all of these great tunes with the guys who wrote them. The Doobies are all over the style map, and that really makes it a really fun and interesting gig.” When Ed isn’t on the road, he plays around his home of Nashville TN. He has played on many records and has also been fortunate enough to share the stage with performers as diverse as Willie Nelson, Michael McDonald, Warren Haynes, and Erin McKeown, to name a few. In addition, Ed has begun producing other artists as well and has produced critically acclaimed albums by Jen Porter, Brad Callow and Harriet Street. Recently, Ed has gotten together with his good friend Tim Bradshaw (Dog’s Eye View, David Gray, John Mayer) to create the band, Cooper. Their debut album will be released sometime in 2008. “It’s kind of all rolled into one for me really. I just keep playing and plugging along and am fortunate to hook up with talented and interesting people. I’m pretty lucky!”