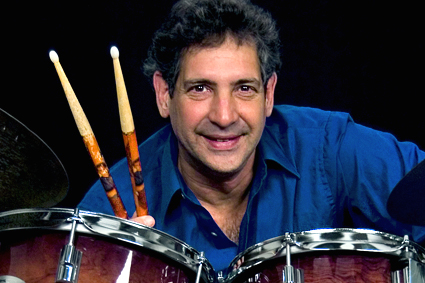 Danny Gottlieb is one of the most popular drummers in jazz and contemporary music. While best known as the drummer in the original Pat Metheny Group, of which he was a member for six years, Danny, during the past 30 years, has performed and recorded with some of the world’s greatest musicians.

A product of the musical education system, Danny earned BM in 1975 from the University of Miami. He has studied privately off and on with jazz legend Joe Morello for over 30 years. Danny has also studied with late studio guru Gary Chester, late Big band master Mel Lewis, Ed Soph, Bob Moses, and Jack DeJohnette. Danny is currently an Associate Professor of Jazz Studies at the University of North Florida in Jacksonville, Florida, teaching applied drum set lessons, and a Distance Learning Evolution of Jazz Class.

Danny has released 10 educational DVDs for the Mel Bay Company, including three with his legendary teacher, Joe Morello, entitled “Natural Drumming”. He has also co- authored a text ‘The Drummer’s Workbook” with Michael Green. A second text, “In the Style of the Great Jazz Masters” is scheduled for release in Fall 2009.

Danny has been on the covers of Modern Drummer, Down Beat, Drums and Percussion, Rhythm, and Drum Scene magazines.