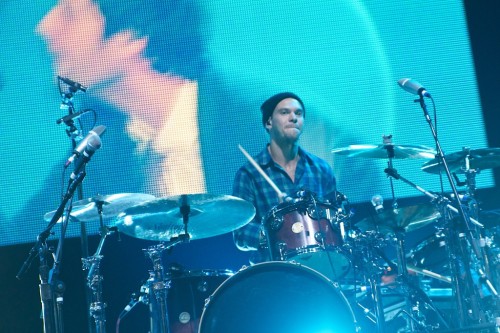 Chris Hartz was born and raised in Los Angeles California and from an early age was given the nickname “bambam” simply because of his ability to make any surface a percussive vessel. At the age of seven he received his first stand up cocktail drum kit, and after a couple of years of abuse Ralph Humphrey, Los Angeles studio icon, gave Chris his first real drum set.

From that point on music has been his one true calling, from the early days of jazz bands to the launching of his career now hitting the big stages. Chris has been playing with bands from the age of fourteen parading up and down the sunset strip playing at every venue that the city has to offer, from the Roxy to Palladium the progression of his drumming style and his overall musicianship continues to blossom. Chris received his degree in Studio Music and Jazz on drumset performance from the University of Miami, after which he moved back to Los Angeles and began playing with Artist such as Jacob Luttrell, Childish Gambino, Tim Williams and many others.

You can hear Chris on the TV show Happy Endings in which he plays all the musical cues, and showcases the versatility of the Soultone Cymbals as well as on many movie trailers. He is also in the group Childish Gambino, which just completed their first national, sold out tour and will be seen across the country in upcoming months. Chris is a proud user of Soultone Cymbals because they give him the sound that he needs to cut through in live performances and the precision and tone in the studio.