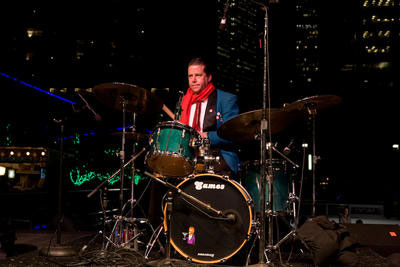 When hearing The Beatles at the age of 8 he decided then and there that he had to play drums. That singular event set him on a musical journey that is still a life long quest to be the best musician he can be. Eric studied percussion at Plymouth State College in Plymouth, NH and went on to study drum set at the University of Miami (FL) with Steve Bagby and Steve Rucker and earned his Master of Music in Studio Music and Jazz in 1996.

Eric began teaching percussion at his alma mater PSC in the spring of 1996 and he eventually directed the Jazz Ensemble, the Percussion Ensemble, and several small jazz groups. Eric moved to Austin in the spring of 2001 and immediately began to perform with local groups and became a first call drummer for The Hollisters, Mike Barfield, Elizabeth McQueen, The El Orbits, The Allen Oldies Band, among others, and has performed in every corner of the United States and has toured overseas. Currently he performs with Jesse Dayton appearing every Thursday at the venerable Broken Spoke in Austin. Eric has studied with Joe Morello, Ed Shaughnessy, and Chuck Silverman. Eric gleefully plays Eames Drums and proudly endorses SABIAN Cymbals, Vic Firth Sticks and Humes & Berg Cases.