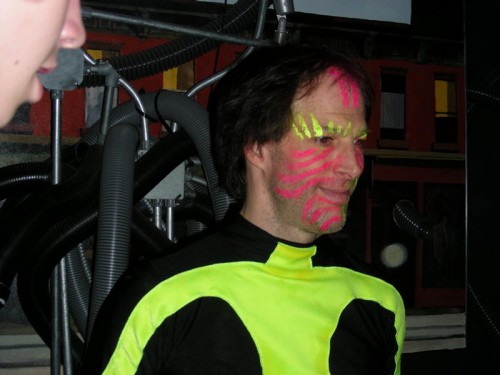 Born and raised in rural Wisconsin, Jeff has been drumming for over 35 years. He spent his childhood listening to eclectic music, turned onto the rock, pop and jazz icons of the day by his older sibling. “I saw the Grateful Dead and Allman Brothers in second grade, thanks to my brother,” he recalls fondly. “I started playing in bands in high school and haven’t had a real job since I was 23.Jeff moved down to Miami in the 80’s and was schooled by Eddie Harris. Later on, he toured with Expose, Julio Iglesias and the Bee Gees. The best fun was my Dead cover band, The Zen Tricksters.

In ’94, Jeff had a friend who knew Ian Pai (original Blue Man Group drummer) and he got an audition as the Blue Man back-up drummer. He got the gig when we opened in Boston and had a blast there for two years. When the show went to Chicago, he made the move.” Jeff sits on the kit, providing the pulse behind the Blue Men and has a voice in the musical direction of all the Blue Man shows.