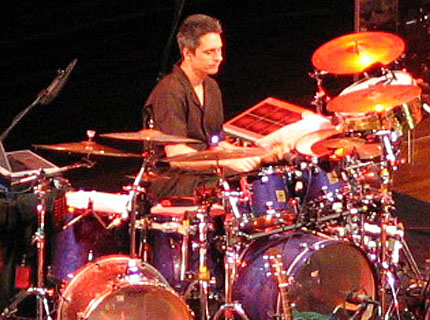 BLENDING THE THIRD WORLD WITH THE NEW

In the past twenty years or so, a New York City music fan out for a night of high-quality rock, pop, jazz, world music, singer/songwriter folk, or alt-country might well have been moved by the superbly musical and confident drumming of Graham Hawthorne. During this time he was also establishing himself as a player of national importance, recording and touring with artists such as Aretha Franklin, Harry Belafonte, and Joan Osborne.

More recently, Hawthorne received even wider exposure on a lengthy tour with Paul Simon. Now he’s out with world music maven David Byrne. Hawthorne’s mastery of Brazilian and West African rhythms, as well as his crisp approach to American pop music, makes him a natural for performers as adventurous as these.

Hawthorne’s funky, authoritative, yet ultimately supportive drumming can be heard on David Byrne’s current My Backwards Life tour. In addition, Hawthorne’s passion for world music has led him naturally to assume the role of producer and composer. Information about his own CD, Mbalafunk, can be found at www.mbalafunk.com.
Graham Hawthorne graduated from UM in 1984.  Check out his CD at www.mbalafunk.com.

Graham states:  “UM school of Music has a sort of informal alumni association in the Pro music world. When you say you went there people know you can play at a certain level, and other UM alumni know that you speak the same musical language as them. It’s sort of like going to Wharton business school or Harvard law school or NYU film school. This is tremendously helpful in getting work once you are out of school, to say nothing of the skills you acquire while you are there.”

The following is an interview for Modern Drummer July 24, 2005:


GH: the traditional way of making a rhythm track/recording has all but disappeared in new york. It used to be that a producer would bring in a drummer, bass player, guitar player and keyboard player and you’d work on the tune and do takes until they were happy. That became the backbone of the record, even if there was a lot of editing/sequencing/needle-dicking to be done after the fact. Generally nowadays I’m brought in after the track has largely been conceived – usually there’s one or more loops and/or sequenced drum elements, and they are as important to the track as the live drums will be. Live drums are added as a flavor, often because someone thinks that programming and loops are “stiff”. Several things are different when this is the case:

1. you are GOING to get edited. Even the least invasive producer or artist who says, “oh man, it feels so good I’m just going to leave it alone” is kidding himself. You’re going to get moved around, slid, pulled apart, sound replaced, etc, etc. In a way this actually frees you up to try things. I equate it with being a synth player who’s brought in to do overdubs – you have more latitude to experiment with different sounds and parts. Sometimes I’ll do 2 or 3 completely different sounds – bigger drums-smaller drums, different beaters, more roomy sounding/close mic’d, etc.

2. it’s more important than ever to be able to play with a computer generated time reference (loops, cliks, programming). The more you are capable of “burying the clik” the easier it is for them to cut you up and move you around based on the computer grid. That being said, it’s also necessary to be able to sound old-school and play very loose on the time with lots of personality and feel, since often times that’s why you’re there in the first place; most producers have the skills and equipment to create computer drum tracks which sound like live drums; what they’re looking for sometimes are things that are difficult or impossible to program…

How all of this affects the “work aspect”:

There are so many people producing music because of how cheap studio gear has become. consequently, there are more opportunities for studio work than ever, BUT, the work is less centralized, and it’s very difficult to make a living because the money is super low. (keep in mind that most recording these days happens without record company or advertising agency backing – the artist or producer is paying you out of pocket and hoping to sell the final product.) The days of a handful of session guys doing all the work is over – every producer can and usually does use a different set of musicians. With protools/DAW editing being so easy to do, a lot more musicians are usable in the studio – the perfect precision of a great session drummer isn’t necessary to get a track or some flavor that sounds good in the song.
So every kid in a rock band can do “session work”. chances are good that he/she knows at least 5 people who are writing and recording music, and he/she can become their session drummer. It’s doubtful that he/she will make a living, and the likelihood that it will lead to further career growth is slim. The chances of becoming the next Steve Gadd and being paid tons of dough for playing on big records is NIL. The biz has changed, never to go back.
Lastly, there are still some old-style big studio dates around – every once in awhile big artists still make records with budgets, movies still have soundtracks, and corporations still use original jingles to sell their products. Most of this work is going to continue to be done by long-established studio drummers. What slips through the cracks gets divided up amongst the large pool of great players around. A new drummer if they are really good may get the occasional big session, but that’s unlikely to build enough “critical mass” to make a full-time living.

What’s the most unique thing about the new york music scene to you?

GH: New York is still in some ways a Jazz town – what I mean by that is, the players that often get the highest regard from musicians and laymen alike are those that have Jazz skills and credibility, or maybe that’s being too specific. Let’s say that the players who have the kind of chops which result from practicing and playing instrumental-gymnastic music are sometimes rewarded with work that’s totally inappropriate for their skills. Example: when a jazz/fusion style player gets a gig with a pop star or a record date playing straight 2+4, it’s ridiculous and stupid, and I think it happens in New York more than anywhere else. Now if the musician has those chops as a young player and then goes on to mature and develop a great groove and pop music esthetic, it can make for wonderful music. But often times the guy gets the gig because someone has seen them play a million notes at a jazz club, particularly if the million notes are played in some vaguely “funky” format.

The following is the unedited text of another interview that Graham just did for MD which is going to be integrated into a larger article called “NYC Uptown Power Drummers Lunch Roundtable.”

What age did you begin drumming?

GH: Hard to say, my dad was a session+jazz drummer in chicago when I was born, so I always played. I suppose I got serious about age 5.

Are you a Native New Yorker or what age did you move here?

GH: No, I moved here at 21 after graduating from the University of Miami.

How did you first assert yourself in town and what was your first big break?

GH: When I first moved to town in 1984, a bass player I knew from the University of Miami named Paul Nowinski heard that Barry Finnerty (brecker brothers, crusaders, miles davis) was looking to put together a new trio and he got us a very informal audition. we got the gig and started playing around town at places like 7th avenue south. As a result I played with and met a lot of session/jazz guys, and it just grew from there.

A NYC drummer has obstacles that drummers in other cities don’t face: rehearsal space, storage space, transporting gear. How do you get around that?

GH: I think I’ve always been lucky that way – at first I always had a gig with someone who had their own space (no scary music building rooms!) and I kept my stuff there and was able to practice and rehearse – later I always had my own recording studio. Regarding transport – I kept a car for some years, but it was a pain in the ass, so I got rid of it and used cartage or relied on rides or rented cars. then I got to a point where I just wanted a car for other reasons, so I got one but luckily I never have to move drums anymore!

What are you currently working on? Recent releases to mention?

GH: Lots of recording on my own and doing drums for people at my own studios, producing a great young new york band called The Navigators, a smatter of touring with david byrne, and musical directing for a really great TV series in development called Drumgirls, about women in world music.

GH: I suppose a Paul Simon gig at the greek theater in L.A. with Paul McCartney guesting in 2001; The entire David Byrne tour 2004-2005 – he’s such a great leader and artist; my first big NYC recording date – a big band date with an incredible line-up of heavyweight session players including Ron Carter, Jon Faddis, Randy Brecker, Ronnie Cuber, etc. – there have been many more since and the old school session guys never fail to amaze me. Lastly – every note of funky music I get to play with my band Astroglide.

How do keep your craft sharp? Continue studying, etc.?

GH: It takes a long time, but you eventually get to a point where you have all the chops, concept and vocabulary you’ll ever need – then it’s about who you are. So now I just play and keep an open mind, and I find I’m always learning and growing.

Who are you favorite drummers? What are you listening to now?

What advice would you give a young drummer wanting to pursue the NYC scene?

Hmmm, well, if he/she were dead set on living in new york, I would say that it’s good to specialize – to be great at a particular thing or style and to carve a niche as a true artist in that thing, whatever it is. Being versatile is cool but when we think about the greats, they generally fell into one particular niche and inspired a scene while being creative.
If he/she were not dead set on living in new york, my strongest advice would be to pick another place to live! The music biz has changed radically it’s not necessary or even advantageous to live in one of the music mecca towns anymore. You can make just as much of a splash, have equal access to gigs, record companies, whatever, in lots of smaller cities than new york. the lifestyle in many other places is better, and easier to live places can be more conducive to creativity and developing something unique – it’s much easier to keep a band together also! I think in the coming years we are going to see the most creative music coming out of places like Berlin and Prague for several reasons. 1. They are world class cities with great cultural history which are less expensive and easier to live in than New York or LA. 2. They are cultural melting pots, which is required for innovation in music. 3. They are on the upswing, whereas the American music-biz cities are on the downswing, along with the business in general.