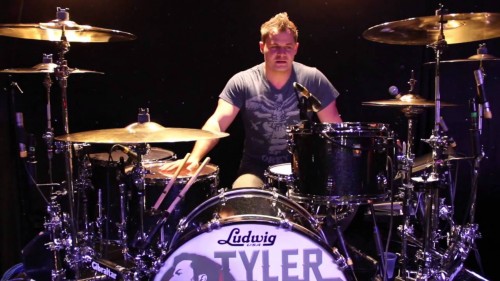 Currently on the road with Tyler Farr, Mark Poiesz quickly became the choice of some of the hottest names in Nashville since arriving in 2013. In a mere 12 months, Mark went from being an unknown in Music City, to touring with country heartthrob Chuck Wicks, to backing the breakout guitarist/vocalist Lindsay Ell on the road with The Band Perry, to slamming the skins with Tyler Farr, fresh off his first #1 smash, “Redneck Crazy.”

Originally from Mechanicsburg, Pennsylvania, Mark’s professional career began at age 14. After high school, scholarship opportunities led him to the University of Miami, where he earned his Bachelor of Music degree in Studio Music and Jazz Drum Set in 2007. During his four years at UM, Mark participated in several Downbeat award-winning ensembles and had the honor of performing with the Grammy nominated Concert Jazz Band during his final year.
Since finishing school, Mark performed on over 50 records as a session musician in South Florida, toured, wrote and recorded with rockers Ghost of Gloria (EMI) and appeared throughout the Americas with pop icon Jon Secada. In the pursuit of even bigger goals, Mark made the move to Nashville in 2013 and has continued at full throttle ever since.

Above all, Mark is powered by a relentless positive outlook and a fire that knows no bounds, ready to greet each new audience with his own unique brand of passion on the kit. In 2015, Mark will be appearing with Tyler Farr as a supporting act on Jason Aldean’s “Burn It Down” tour, as well as a packed schedule of festival and television appearances in support of Tyler’s sophomore album, “Suffer In Peace.”